If I can touch people with my words and concepts I feel like I’m doing my part to spread love and positivity in the universe.

Hot after dropping his new album ANTHEMS OF A DESOLATE WASTELAND, turntablist/emcee/self-made businessman and producer PROLIFIC launches his new website WWW.DJPROLIFIC.COM On this new site, Prolific will update his fans on all the new music, tours, videos, photos and everything else going on in his life. We wanted to take this opportunity for an in depth interview with the man himself! Your new album intends to cause a stir in the dubstep, trap and hip hop scene due to its merging of styles and quality of the productions How long was this album in the works for?

Right around a year and a half or two years. Some of the hip hop is way older as I have an arsenal of underground hip hop that is unreleased and I like to drop certain ones on my EDM releases when possible. I’m just blessed to be able to create something that is unique and has it’s own vibe and people can feel it.

Rockin It and Arcade are some of the DJ’s favorites of the album. Which tracks would you like to point out as your personal favorites?

I like all of them in a different way. I try not to play favorite on anything just to see the strength and weakness in each composition and who it’s marketable to. It was a pleasure to work with every artist that pitched in on the projects. I know when I play out people go bananas for most of the bass heavy tracks so as long as the crowd likes it I’m cool.

Is there any style of music you would never merge with your own, or are you open to any sort of style to experiment with?

For sure I remember a couple years back Killahurtz commissioned me to do a two step garage house type of project and we made it big and charted well with the UK label it’s released on. That was the first house type track I seriously approached and though it was different it created more fans that were from a different walk in life and that to me is what is all about. If I can touch people with my words and concepts I feel like I’m doing my part to spread love and positivity in the universe. Obviously I love producing and spitting vocals on anything whether its grimy or beautiful I’ll lace it and make it just that much more diversified so anyone that wants to reach out and collab you won’t be disappointed as I take every project very serious. What has been the craziest thing that ever happened while you were on one of your many tours around the world?

I played in Isreal in an underground parking garage filled with about two thousand people that would have been super sketchy to most people but I’ve grown up in some rough places so I felt at home. Though really it was a very surreal environment there this wasn’t the super baller club: I felt like I was in the war zone, but with dj’s! To be honest sometimes I’d rather play in some underground parking garage filled with people who are there to enjoy music, feel the love in the room and not focus on anything negative just enjoying life with good music and good people.

What’s the best advice you can give to new people in the scene?

Keep it 100% with everyone don’t fake it for anybody and be true to yourself and those around you. Don’t get caught up in the hype and keep it original.

How long have you been chasing the dream for before getting to the point where you are at now?

I started playing jazz bass with an ex navy seal when I was 9 years old. This dude was awesome he could play guitar the organ and sing at the same time even though was damaged from the governments mis treatment of veterans in that era. I learned a lot from him and really gave me a prospective of my love for music. Through my teen years I was mostly into metal and punk and one day hip hop entered my life and that is when I stopped wanting to do the band thing and just wanted to write my own beats and rap. As I was crafting my rap style and battling all over the USA at different events this rich kid mammas boy told me one day that I could start djing and I’d never be better than him so I did and beat him in a battle around a year or two later. It was weird coming up in the hip hop and dnb scenes as people were like who is this guy that can rap and do all the tablism ? Luckily most people were digging it and when I was touring I had more things to shop to promoters doing different genres. After ripping and tearing for every inch the dub step scene came into play and that’s where I really got to go to some really cool places and do bigger things. I can’t believe how far I’ve come and feel grateful to everyone even people who hate me as all that I have for them is love. What’s the planning for the next few months?

Where I live in the paradise of Destin FL we have a top notch venue we host a slew of events at so I’ll be staying here for spring break hitting sxsw and wmc in between and around summer time I plan on doing another big world tour to promote my album.

If you could give a shout out to a person you really admire. Who would it be and why?

I admire every living creature on this planet. I don’t like or dislike anyone more than the next. Life is a beautiful thing and it’s important that all of us create a positive vibration as a whole in what ever way possible. I want to give a shout out to the benevolent souls and the purveyors of truth.

What’s the best prank you ever pulled on someone?

One of my good friends got white girl wasted and made an arse out of himself then passed out in his car as we didn’t want him to drive in his condition. So we drove it to the beach and locked the doors with the child locks on so he couldn’t open it up from the inside. We parked it in between these dunes so it look like he was far off somewhere on a beach. He woke up in a puddle of his own sweat and vomit in the back seat going mad because he could get out and figure out what was going on. It was pretty funny and I think he learned a valuable lesson about controlling his drinking out in public.

Is there anything else you would like to mention?

I’d like to thank you guys for helping me push this new project and showing me love it means a lot! On a side note I’m helping my friend get his new project off the ground and giving him direction. It’s called Earbutter you all should check it out when you have time.

Thanks Prolific for your time!

Russia’s famous show DANCEKRAFT RADIO had the honour of hosting an exclusive mix by Prolific. The show aired April 8th to 13th across various stations in 450 cities of Russia, Latvia, Armenia, and Ukraine. Response was amazing with lots of feedback. Many listeners complimented, as they called into the show. The show is now published in a podcast for subscribers all over the world. To be downloaded for free on iTunes:

ANTHEMS OF A DESOLATE WASTELAND
OUT NOW On BEATPORT (Digital)

As appreciation for the fans, PROLIFIC often offers free downloads on his Soundcloud page and he urges everyone to download and share. 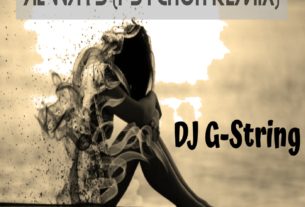